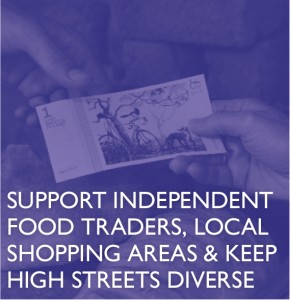 The city should have fresh, seasonal, local and regional, organic and fairly traded food staples available at affordable prices in all local shopping centres. Buying from local, independent food shops and traders is far better for local employment and can make a significant contribution to Bristol’s economy.

To be effective, community-led ‘good food’ trade has to be well promoted and supported; seen as integral to the city’s food system.

Finally while there is always a place for supermarkets in the food industry, Bristol must be strategic in its retail planning; controlling supermarket expansion and only allowing new sites where it will be beneficial for the local community.

Fact
»» Each pound spent in local, independent shops supports at least twice as many local jobs compared with spending in multiple chains.

»» 2000 independent food retailers go out of business each year nationwide.

»» In 2009 the UK Competition Commission urged tighter planning rules to stop large supermarkets squeezing rivals. In 2004, 19 stores were owned by ‘The Big Four’ in the West of England. By 2010 this figure had risen to 76, and to date there are now around 100 stores in the city alone.